Ash Is Back In Teaser Trailer For Ash Vs Evil Dead 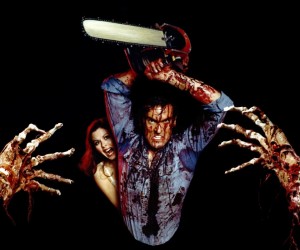 The long awaited return of everybody’s favourite chainsaw wielding badass hero is finally upon us, and the teaser trailer is bloody and very intoxicating.

The character of Ash was first brought to life in the classic horror franchise The Evil Dead, and now Bruce Campbell will be reprising the role to put Ash back in danger from the deadites. The show, Ash Vs Evil Dead, will be premiering on Starz later this year and they’ve released a teaser showing Ash with his weapon of choice.

The first season of Ash Vs Evil Dead will have 10 half-hour episodes and will be executive produced by original director Sam Raimi (The Evil Dead, Drag Me To Hell) alongside Rob Tapert, Bruce Campbell and Craig DiGregorio, who will also be show running. The show is currently in production in New Zealand.

After Ash has spent the last thirty years avoiding all responsibility attached to the deadite apocalypse and the possible destruction of the human race, he is finally pulled back into the middle of the dead drama. As the deadites threaten to completely wipe the planet clean, Ash has no choice but to face his demons, but the evil manifestation doesn’t have any plans to allow Ash to be the hero again.

Starring alongside Campbell is Lucy Lawless (Salem) as Ruby who blames Ash for the cause of the end of the world, Ray Santiago (Meet The Fockers) as immigrant Pablo that becomes Ash’s sidekick, Dana DeLorenzo (A Very Harold and Kumar 3D Christmas) as a child off the rails and trying to outrun her past and Jill Marie Jones (Sleepy Hollow) as State Trooper Amanda who feels Ash is responsible for his partners death and wants his head.

Ash Vs Evil Dead will premiere on Starz this fall.