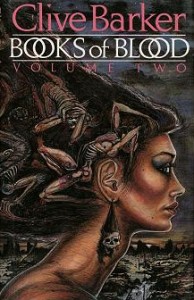 Volume 2 of Clive Barkers Books of Blood contains 5 positively delectable tales of terror starting with Dread, Quaid is a man who experiments with fear. He picks his test subject and forces them to realise their ultimate horror and how long it takes to get there but his own dread can’t stay hidden forever.

Hell’s Event is a charity race held in London every hundred years, a race between Hell and mankind, the winner to rule the earth. Equal doses of Hell’s representatives and the unwitting ideal of man, one side desperate to win the other not a clue to the importance of the result. Some do however and confidence breeds contempt, it’s not just about the race however, there are some wickedly compelling characters on the periphery.

Jacqueline Ess: Her Will and Testament was probably my favourite story, a woman fails in a suicide attempt and as a result finds she has abilities worthy of nightmares. Sex, dismemberment and much worse, this woman’s story is totally gripping. Disturbing horror with a slice of love that takes some searching for but results in an unlikely happyish ending. This was my favourite story amidst the scattered body parts.

The Skins of the Fathers sees Davidson witness a procession of monsters when his car breaks down. Years past saw these creatures mate with a woman from the local town and they’ve come back to claim the child. Easier said than done in the Arizona desert.

New Murders in the Rue Morgue is a strange tale of an experiment with a primate. Lewis is called to Paris when a friend is arrested for murder, his investigation reveals something astonishing and something his friend can’t face.

Second volume done and I’m seriously getting into Clive Barkers twisted rhetoric and general fiendishness. Clive is set to release a collection of short stories and poems – Tonight, Again: Tales of Love, Lust and Everything In Between. The collection is also illustrated with a dozen of Clive’s line drawings. Set for release in 2016 by Subterranean Press.