Bold New Poster for Horror-Musical Anna and the Apocalypse

We’ve been talking about this film for what feels like forever, but the end is finally in sight. The season of Christmas is almost upon us – deal with it – so Anna and the Apocalypse can shine in the time it was made for.

A brand new bright, bold and colourful poster has been released for the film which is a horror-musical zomedy set during Christmas. That is certainly a sub-genre of film we need to see more films from. 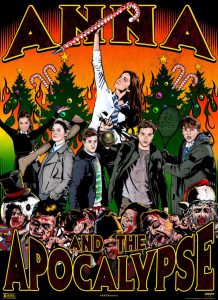 Anna and the Apocalypse will be released in select cinemas on 30th November, before releasing nationwide on 7th December.