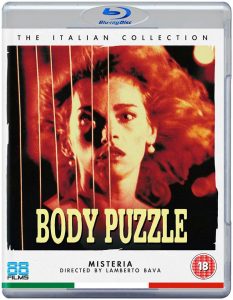 After helming the revered 80s cult, but not quite classic, film Demons and its sequel Demons 2, Lamberto Bava arguably never made a movie that matched the quality of his father’s work. While Dad Mario directed the matchless likes of: Black Sunday, Rabid Dogs and Lisa and the Devil, Lamberto’s output peaked with the Dario Argento produced Demons then waned into feathery DTV drivel throughout the rest of the decade. Body Puzzle, Lamberto’s third to last feature, is shockingly schlocky video shop fodder that structurally echoes Deep Red and various Gialli but features none of the opaque visual beauty or eloquent craft of Bava’s Giallo forefathers, as well as his biological one.

After an explanatory prologue featuring heavy male panting accompanied by a POV peering over a wind shimmering shrub, BP unravels gawkily. A death in a chocolate shop prods the plot into a police procedural regions, dotted with bog standard gore splodges and a couple of gaudy death scenes that amuse for a second but for all the wrong reasons. Action and murder are interspersed accordingly to alleviate the mind routing agony needled by the acting but sadly, despite some histrionic vibrancy, most of Body Puzzle’s kills are derisory spoilt. 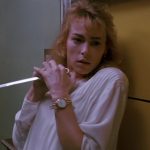 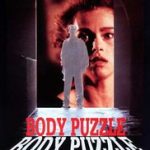 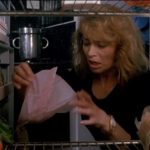 Book Editor/protagonist Tracy befriends then beds a cop on a murder inquiry who believes she has been marked for death by a local serial killer. Soon after, Tracy finds an ear in her fridge, a hand on her door and a penis in the post box. So much for saying it with flowers. A toilet cubicle set decapitation engrosses for its fleeting duration so fails to make an overall impact during the first act while a bloodless underwater stabbing wastes a conceptually interesting (on paper) set piece. Other screen deaths include knifing in a class full of blood splattered school children which lends little weight way too late and the aforementioned death of an Italian Chocolatier (M&Ms everywhere).

Other than the pulpy cover/ poster, plot and gory death scenes, Bava’s film evokes sleazy American 90s noir. Recalling erotic thrillers like; The Color of Night, Sliver, China Moon, Final Analysis and Body of Evidence which studios churned out after the success of Basic Instinct, and subsequently sullied rental stores throughout the rest of the decade. A sex scene adorned by a sax solo supports this, along with other Casio tapping ditties by Carlo Maria Cordio, who also composed scores for Troll 2, Aenigma, Killing Birds and Curse 2: The Bite, so knows his way around a shoddy death scene or two. Cordio’s tunes may adorn the more higher octane murders and stalking/chase sequences with a rhythmic synthesiser pulse but Body Puzzle remains excruciatingly trying. 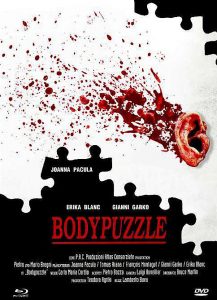 Bava’s film almost slightly redeems itself with an ingenious twist in the finale but the proceeding 90 minutes are unfathomably hackneyed. Between kills, the story’s majority consists of banal police procedure, exposition and character back-stories which makes the plot yawn out into an agonising trudge that dithers and stumbles from the outset. Drama and suspense are debilitated by phenomenally plastic acting, flunky dubbing and clichéd characters, coupled with kid-play death scenes which debilitate any chance of being stirred out of boredom. Body Puzzle’s flaws accumulate to form a steaming mound of shameful horror poppycock schlock or a body puzzle that’s missing most of its segments.