It’s fair to say that here at Scream, we’re all a little excited about Boar, the new Aussie gorefest from Charlie’s Farm director Chris Sun. With the film recently picked up by Universal Pictures Australia, we finally have our first teaser, which runs just 15 seconds, but still managed to put a big smile on my face. 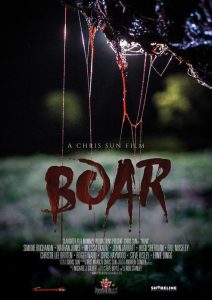 While comparisons to Ozploitation classic Razorback seem inevitable, this film features a far bigger boar and promises a lot more splatter. Eschewing the temptation of an entirely CGI monster, Sun confirmed earlier this year that his 14-foot long, 8-foot tall beast is brought to life with “…80-85% practical FX and 15-20% VFX,” with CGI only being utilised to “help him move and look as realistic as possible.”

The beast will be unleashed for the film’s world premiere at Australia’s Monster Fest film festival on November 23rd.