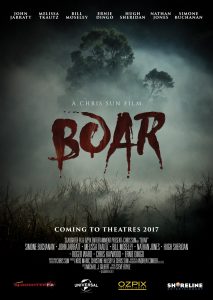 Boar, the latest Aussie gorefest from Charlie’s Farm director Chris Sun, has been picked up for distribution by Universal Pictures Australia, who have put out this new artwork.

Inviting comparisons to Ozploitation classic Razorback, Boar turns the Australian Outback into a hunting ground for the blood-thirsty beast of the title. The boar itself is even bigger than that seen in Razorback however, and the film promises far more splatter, too. Eschewing the temptation of an entirely CGI monster, Sun brings his 14-foot boar to life mostly with animatronics and, judging by what we showed you in the mag, it’s an impressive creation indeed. 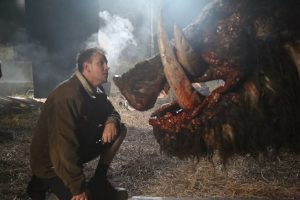 Universal have an Australian big screen release planned for this year. We eagerly await news of the film’s appearance in the Northern Hemisphere.