Blumhouse to Turn The Horror of Dolores Roach Into TV Series

A TV adaptation of the popular scripted fiction podcast The Horror of Dolores Roach is in the works over at Blumhouse. The production company has acquired the rights to the macabre tale, which is inspired by Sweeney Todd. 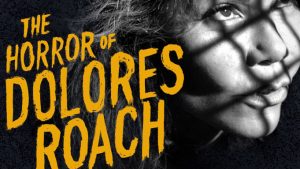 Set in a gentrified New York City neighbourhood, The Horror of Dolores Roach follows the titular Roach as she gets out of prison and finds herself staying with an old stoner friend, Luis, who lets her give massages for cash in the basement apartment beneath his shop. But it isn’t long before those clients start showing up strangled…

The podcast is written and directed by Aaron Mark. Mark will pen the adaptation, as well as serving as an executive producer. Blumhouse’s Jason Blum, Marci Wiseman, and Jeremy Gold will also executive produce, along with Chris Giliberti and Justin McGoldrick of Gimlet Pictures, the podcasting company behind Dolores Roach.