Bloody Violent Trailer and Poster for The World of Kanako 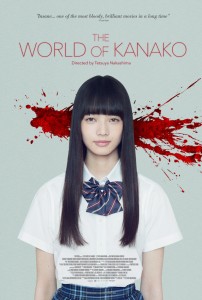 The revenge-thriller The World of Kanako has received a bloody, brutal and beautiful trailer and you can watch it below. Asian cinema is known for its confidence and bravery when making films that are truly relentless and shocking in their depiction of violence, and this seems to be another addition that has no problem showing some pretty nasty stuff. That being said, the film looks stunning and its cinematography is as beautiful as its violence is vicious. The ability to blend gorgeous visuals with startling scenes of brutality will always be something that gets us interested and excited.

Synopsis:
An uncompromising revenge thriller of operatic scope, The World of Kanako is a non-stop visual and emotional assault to the senses as it follows troubled ex-detective Akikazu (Yakusho) on the hunt for his missing teenage daughter, Kanako. What he discovers in his search is an unsettling and harrowing web of depravity–surrounding both Kanako and himself. As Akikazu stumbles along a shocking trail of drugs, sex, and violence, he finds himself woefully unprepared for the revelations that affect all he holds dear.

The World of Kanako is an astonishing tour de force of mystery, beauty, and boundary-pushing violence. A wildly kinetic and startlingly venomous throwback to the best that Asian extreme cinema has to offer, The World of Kanako offers a trip right up to the edge of a man’s private hell––and over it.

The World of Kanako will be directed by Tesuya Nakashima (Memories of Matsuko, Confessions) and stars Koji Yakusho, Nana Komatsu and Satoshi Tsumabuki. Check out the trailer and the simply effective poster below, which gives us a nice little tease of the bloodshed we should be expecting. The film be released in limited cinemas and on VOD on 4th December 2015, so it will make a great pre-Christmas treat!