Dolph Lundgren Makes No Promises in Don’t Kill It Art 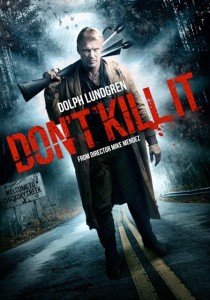 A few months back director Mike Mendez shared this gore-soaked image from his upcoming horror Don’t Kill It, which stars ‘80s action veteran Dolph Lundgren. Now we can share with you the poster art, featuring the man himself. And he still looks badass.

As well as the Friday the 31st segment in last year’s Tales of Halloween, Mendez is responsible for giving the world The Gravedancers and Big Ass Spider!, as well as straight-to-video masterpiece (at least, according to this viewer) The Convent, a prequel to which he is now working on.

Demons, Dolph Lundgren and a room full of severed limbs? Well, I’m sold, despite that slightly dodgy title. Shame the poster cannot confirm a release date, but we can expect to see Don’t Kill It sometime later this year.