Synopsis:
Joe Fischer is the Sheriff in Gilson Creek in Maine. In 1997 he dealt with a series of deaths that were attributed to attacks by a mountain lion. Joe knew different. He should have dealt with the situation then, but didn’t.

Seven years later, the beast is back. It only attacks when there is a full moon. It couldn’t be the same beast. Could it?

Joe and his deputies must prepare themselves for the next full moon coming. This time it’s personal. Especially when his daughter Sonya is at risk.

Now there is no secret that this book is about a werewolf. It’s on the front cover so I’m not giving anything away. Werewolf stories are ones that generally don’t float my boat. I have only read a few that have held my interest through to the end. Blood and Rain is one of them. This is how you write a story about a subject that has been done to death in my opinion and make it fresh and fun and enjoyable. Oh and scary.

Characters in this one? Joe Fischer, the Sheriff. A strong, upstanding man in town. He seems to have the respect of his staff and the townsfolk. The kind of Sheriff you want to have. His daughter Sonya is a typical teenager with a boyfriend. She wants to have fun all the time but seems pretty responsible at the same time. Stan Springs is the old Sheriff. He has some secrets. He used to be respected but now everyone hates him. Including me. Rightly so. He’s not very nice now at all. In fact, he might be pure evil. Nick, Wes and Joel. Three friends who run a paper that has been trying “break” a story for years about the “Full Moon Beast” in the town. Sort of just doing their job but pretty vile at the same time.

Mixed in with this lot you have all of the normal small town folk. The town drunk, the café owner Mel, a mix and match of all the normal people you would expect in a town like this. All of the deputies seem to be excellent at following their Sheriff and excellent at their jobs. They do work together very well. This is a sign of just how good Joe Fischer is at his job.

The characters in this story are all very well written. They are all believable and seem like real humans. You could picture some of the people from your own home town in their places. They all work. You like the goodies and hate the baddies. Just how it should be.

The plot? Pretty simple. It centres on Sheriff Joe Fischer and his band of deputies as they first try and discover the cause of some grisly murders. Once the cause is established, and Joe has admitted to the secrets he has been keeping to himself for years, they can get on with a plan of action to stop more bloodshed. Things don’t always go to plan though and……well I’m not saying anymore.

What we have here is a story right out of the 80’s horror film genre. It took me back. It read as something that would have been perfect in that age on the big screen. It has all the perfect elements for me for a horror story using one of the oldest forms of evil beast the world has known. What it also has though is a huge human element to the story. Joe Fischer has obvious regrets about what happened years previous. He knows what he did wrong but can’t admit to it because people just wouldn’t believe him. Well most wouldn’t. He has also hid the secret from his daughter. How can he bring himself to reveal what he knows without feeling a fool? Well, the way Glenn Rolfe has written this story, he does it very effectively.

In the real world we all know werewolves don’t exist. Don’t we? Well this story had me convinced they do. It wasn’t “sensationalised” it was straight to the point writing that was fun and enjoyable. It was one hundred miles an hour from start to finish. Very little time to catch your breath in between scenes. It also had a few other things that make books like this even more enjoyable for me. It had “scream” moments. Times when you are reading a section and you are screaming at the character in the book to either do one thing or not do another. Plenty of “Nooooooooo!!” shouts. 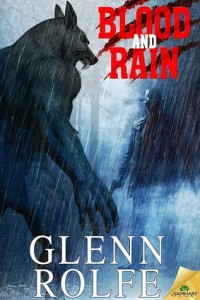 As I said above, with Glenn’s earlier work you could see he was just starting out. The stories were good but could have been more polished. With Blood and Rain there has been a huge leap forward in his writing. It’s much improved, more polished, and much more mature. I knew when I read him a few months ago this boy had a talent for writing. He has just proved to me that if he keeps going at this pace then his books will just keep getting better and better. Glenn Rolfe could be a force to be reckoned with in a few years’ time. You heard it here first!

To summarise: a werewolf story with a certain human element to the story, showing that we all have flaws. Some are just more costly than others. If you want a book with blood and guts that is one hundred miles an hour from start to finish and will leave you breathless at times, then this is the one for you.