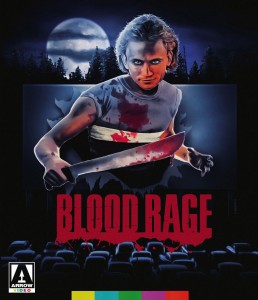 Synopsis:
Witnessing their mother Maddy (Louise Lasser) making out with her boyfriend at the local drive-in movie theatre, twins Todd and Terry (Mark Soper) are pushed over the edge resulting in Terry taking his emotions out on another young couple of filmgoers with murderous results.  The sly Terry manages to pass the guilt off on his innocent brother, resulting in Todd being locked up for a killing he didn’t commit, whilst Terry gets away scot-free.  Ten years pass and Todd, determined to clear his name, escapes from the psychiatric hospital where he’s been held and heads home to confront his mother with the truth.  Terry however is not about to let his past misdemeanours become common knowledge, and will resort to anything, including murder, to keep the darker side of his personality a secret.

It is difficult to know which side of the fence to come down on when discussing the merits (or lack of them) where Blood Rage, also known under the equally enigmatic title Nightmare at Shadow Woods, is concerned.  Here is a film which was released during the height of the 1980s penchant for gory slasher films, and which at the time, fell foul of the censor in the same way as many of its contemporaries.  Watching it now however, the obvious reasons for it being heavily cut for release in the past are the very ones which appear to make it worth viewing.

Many of the classic horrors from the 1980s which came under the slasher film umbrella, got away with much of their violence, because their acting, storylines and production values — though hardly of award winning standard — were at least realistic: one of the reasons the original Friday 13th still makes such addictive viewing today is that the setting of Camp Crystal Lake and the unfortunate kids who die there are, on the most part, believable.  Occasionally other films from the same period were equally authentic or, like The Evil Dead, took such an over-the-top, cartoon approach, that by the end realism was the last thing on the viewer’s mind.  There were however those films which, unfortunately, had few such saving graces.  Blood Rage is one of them.

A reasonably original idea gives director John Grissmer and writer Bruce Rubin plenty of scope for plot twists, and the fact the cast, on the whole, don’t know which twin is which until it’s too late, manages to keep the action, and a degree of suspense, from flagging.  Even so the whole thing generally smacks of an amateur production.  The acting for the most part is pretty grim and not much above that of a sleazy, daytime soap: Lasser – now a respected acting teacher in New York – is particularly irksome as Maddy, who’s slow disintegration into an alcoholic stupor as the film proceeds, provokes more irritation than the sympathy clearly intended.  The other characters are there simply as fodder for the murderous Terry to pick off, with their deaths generally being signposted well in advance.

It is the same deaths however which, in the end, make the film worth seeing  — seldom has there been such an array of wincingly convincing dispatchments as the ones which pepper proceedings here.  With everything from lost limbs — heads and hands go flying — to stabbing, shooting and disembowelment, this film is definitely not for the squeamish.  Ed French, the man responsible for the gruesome effects has, since working on the film, won an Emmy and been Oscar nominated for his make-up effects work, and it shows: one death scene in particular, which gives a new meaning to the expression ‘split personality’, is guaranteed to have you reaching for the sick bag.

Blood Rage may warrant viewing simply by dint of its novelty value.  However it should also act as a warning that inventive murders alone do not a classic horror film make, and that even aficionados of the gore genre demand a little more substance to their viewing.

As usual with Arrow Video their beautifully restored release of Blood Rage on DVD and Blu-ray comes with a host of extras, which are as much fun as the film itself, making it wort the purchase of the three disc set.  As well as three different cuts of the film, there are interviews with cast members and production crew, a featurette which visits the film’s original Florida locations, unseen outtakes and a full colour booklet with writing by Joseph A. Ziemba, the author of BLEEDING SKULL! A 1980s Trash-Horror Odyssey.