In The Blob Sales Art, No One Can Hear You Scream 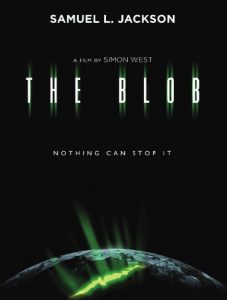 Still more early sales art is appearing for Simon West’s re-remake of The Blob, and the latest closely recalls a classic film poster. You won’t need me to tell you which one. This new artwork also seems to confirm that Samuel L. Jackson – who has been attached for some time, but over whose involvement a question mark has hung – will indeed be starring. The big question now is whether or not Halle Berry will also appear. Distributors Swengroup (Maggie, Chained, In Fear) added a listing for the film to their website last month which has the Oscar winner down to star, although that’s all we know on that.

This new piece of art comes with reports that Arclight Films is handling some of the pre-sales of the film, which will be the second remake of the 1958, Steve McQueen-starring B-movie classic, in which a gelatinous, extraterrestrial creature lands on Earth and starts devouring its way through the populace of a small American town. It was previously reimagined in fine and icky style in 1988 by A Nightmare on Elm Street 3: Dream Warriors/The Mask director Chuck Russell.