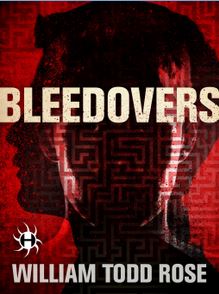 I read Bleedovers completely unaware that it is the second novella in the Crossfades Dystopian novella series and my first read from William Todd Rose.

Mental note: must start the headache inducing drag known as research. That said I didn’t really feel like I’d missed much concerning the premise of a Crossfade but maybe a little with respect to the protagonists history.

What’s a Crossfade? Well first an introduction into the world building. There exists a secret government agency, more secret than both Men in Black and X-files, based in an underground hideaway and known as the Institute. They exist to sort of compartmentalize and even add a slight technological aspect to the supernatural. Our technicians are able to project their spirit into a Crossfade, kind of like a nightmare conceived by the souls of the dead unable to pass on. Where their physical body is nothing more than an illusion in the realm of the dead, who ‘longed to return to the physical world, to claim their spot among the living, and hang on to it with everything they had.’

Chuck Grainger is our protagonist with his handler, a woman known only as control and a young girl from Physical Research and Anomalies, concerned with the paranormal. When The Crossfades start to bleedover, uncontrolled into the physical world and a ghost kills a sleeper then it’s time to go against all protocol and fight what’s coming.

The story starts off with an extremely creepy Crossfade in a school that finishes with a slightly silly jump across a number of rotting pumpkins hanging by chains from the ceiling. It then goes into familiar territory where you never quite know what’s real, nightmare, Crossfade or an all-out mixture. Is it a bird, is it a plane, am I still asleep, pinch myself, gotta be awake now surely, no there’s a bag with my severed head in it. Finally conscious after a couple of false alarms, sure I’ve been here before.

Joking aside there’s some really good ideas in here, the writings crisp, good pace and flow to the story. It certainly felt unique yet at the same time strangely familiar, maybe because I’ve read or seen movies mimicking some of the concepts and I’m sure I’ll read others in the future.