Another episode trailer has sprung up for Netflix’s upcoming series of Black Mirror, which lands on the streaming giant later this month.

It’s anybody’s guess as to the concept of the episode, which is called Metalhead, but the trailer carries something of a post-apocalyptic vibe and there’s definitely something not cool about that dog. 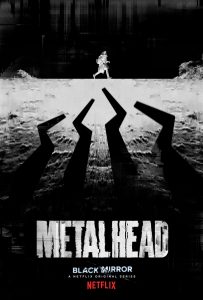 Metalhead was directed by Hard Candy/30 Days of Night helmer David Slade and written, of course, by series creator Charlie Brooker. The episode – which is shot entirely in black and white – stars The Theory of Everything’s Maxine Peake; a familiar face on British TV since the ‘90s. Also featuring are Jake Davies (Ghost Stories, The Missing) and Clint Dyer (Unknown).

Without doubt amongst the very best anthology series there’s ever been, the remarkably consistent Black Mirror returns with six new episodes before the year is out, although Netflix are being rather cagey with regards to a specific date.