Synopsis:
James believes that his sister Heather may still be alive in the Burkitsville woods after she went missing when he was 4-years old. He heads into the forest with a group of friends – and video cameras – in tow and what they are greeted with is even more terrible than before. 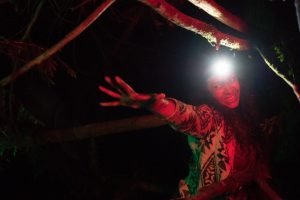 It feels good to be back in the Blair Witch woods, but even better when you finish the film with a massive smile on your face. Everything is going to be fine, because Blair Witch is a damn excellent follow-up to the 1999 ground-breaker and proves that the witch is very much alive, and so is found footage. All you’re probably wanting to know is, is Blair Witch scary? A decent story would be a bonus, but honestly, we’re all about the frights with this one. The Blair Witch Project was one of the first horror films that truly scared me. It didn’t help that I was 14-years old and watched it at a sleepover with 5 other girls who were 100x more terrified than me. I believed the trailers and believed that the footage was genuinely found in the middle of the forest somewhere and that these people were missing. The marketing for The Blair Witch Project was spot-on for creating a heightened sense of fear before you’ve even seen the film, but Blair Witch was without this tactic and had to rely solely on itself, and did it work? Hell yes, it did. It’s the sequel we’ve been waiting 16 years for and it is undoubtedly worth the hard, long wait.

The concept of the film and the reason for the sequel is simple; a guy is sent a videotape that shows a woman in a house – dun dun dun! – that he believes to be his missing sister Heather from The Blair Witch Project. It’s not going to be her, is it? Or is it? Either way, an initial feeling of trepidation will arise that will leave you thinking, “uh oh..” and you’ll spend the entire film with that ache in your chest. You know that some scary stuff is going to go down and it’s just a matter of time before it is unleashed. It’s horrific and extremely nerve-racking, at times, to play the imminent and inescapable waiting game, but those who thrive on fear will love every second. The group we are sent to venture with are, luckily, a great bunch of young folk you won’t be eager to see killed. That, on its own, is a treat because it’s rare for young people to be presented as little more than cannon fodder. In Blair Witch, the characters aren’t carbon copies of one another with no discernible features, but crafted and written as regular young people. They’re inquisitive and naïve, but they’re not stupid and not every decision they make is face-palm worthy. There are plenty of cliched moments in Blair Witch, but they are executed in a way that implies an awareness and understanding of the genre, rather than connoting a laziness that will leave its audience bored and frustrated. You can feel the nods and winks behind the camera as the characters venture off on their own to get fire wood, but the initial conjured suspense renders even the most typical and familiar horror elements 100x spookier.

Once again, we are thrown into the fear’s forefront as we are placed in that unforgettable POV perspective, ready to take on the Blair Witch again. It’s immediately scary as we are shown original, grainy footage from the first film to remind us what we were treated to and now, what we are in for. The anticipation for what’s to come is the most unsettling part about Blair Witch, because with Adam Wingard at the helm, you know that he’s going to aim high with his frights and, boy, will he terrify. The film will pull you in the same psychological and physical directions as the first; scaring your mind with the forest’s hallucinatory terrors and shaking you silly when the god-awful – but freaking brilliant – jump scares are unleashed. The sound is a marvel and, much like the first, it starts as a distant rumble that gets closer and louder, and closer and louder, before all hell breaks loose and you, and the characters, jump out of your skins. If you’re after the scares that make your palms sweaty and your hands shake, then this is it. If you want suspense that’ll leave you covering your face in fright, this is it. This is one of the scariest – and most fun – horror experiences I have ever had, and every horror fan deserves to go on this rollercoaster ride of nightmarish glee. 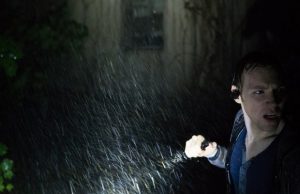 The film wastes no time in getting started and before you know it, we’ve returned to the woods and getting to know the characters on the way. It’s a perfect beginning that sets the pace rolling and it only ever gets faster. By the time we’re back in that horror house, you’ll be absolutely knackered from the horrors that you have witnessed and you’ll be wondering if you can take any more. The finale is a real treat for fans and delivers the same heart-racing thrills as before. It’s not a spoiler to say it’s a very familiar ending, because it is certainly one we’ve faced before. However, this time, it’s bigger, better and more belligerent than before. Despite being in a similar location, there is an overwhelming feel that this one’s scale is larger as it takes the Blair Witch myth and twists and turns it, raising the bar for anyone who dares to follow it. The first-person perspective is no less scarier because you’ve gone down this wooded road before and, if anything, it’s even more alarming to go through it again. The POV is coupled with a heightened, chilling sound design and relentlessly pouring rain, to create a wonderfully wicked stage for Wingard to display his devilish and dreamy nightmares.

In short, when you go down to the woods today, don’t. Blair Witch is a masterful work of horror that is both a  staggering sequel and a terrific love letter to The Blair Witch Project. A must-see.