UNDER THE BLADE: Book Review

The latest book from Matt Serafini is a trip down memory lane. It will take you back to the days of your favourite slasher from the 80s. At the beginning, we relive watching the typical camp slasher. The killing spree of the evil Cyrus Hoyt is only stopped by the final girl, Melanie Holden. Then we get a new spin on things. We get to see what happens to the people of the town when the killing stops.  Then, years later, Melanie returns to the town of Forest Grove to help her recollect the events as she writes a book. And of course, the mayhem starts again.

I loved the town of Forest Grove and what happened to it following the massacre. It’s something you rarely get to see – the aftermath. A moratorium was drawn on all social events, and it became even more conservative. The dark history of the town is revealed piece by piece. Melanie Holden, the survivor of the original massacre, is our protagonist. The other major characters are the Chief of Police and his rebel wife, Trish. All have believable personalities, and there is an intriguing dynamic between the three. We also get to meet a diverse array of locals.

Cyrus Hoyt is a great monster. His physicality oozes Jason Vorhees, complete with a mask. His mask of choice is a welder’s mask. Unlike Jason, we do get some insight into his point of view and his thoughts, so he’s not a mindless killer. We learn the reasons behind his trail of violence.

There are some classic horror tropes like a creepy visit to a gas station, tight lipped locals, and, of course, a massacre at a camp. There is more than meets the eye though, and it far from follows the path you might expect it to go. There is a fair amount of gore, so gorehounds will not be disappointed. My favourite kills involved garden shears to the ankle and a gruesome shower scene. 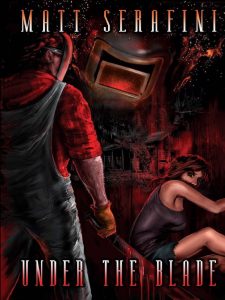 It’s not a straightforward slasher. There are other threads going on that really expand the story and the threat. It’s a small town covering up a big secret and conspiracy is rich. With about 100 pages to go you get a pretty big reveal which leads to big anticipation for the final third of the book. Serafini does a great job with showing us something seemingly innocuous and having it later become important. You could call them twists, or just things falling into place in an unexpected way, but there was one particular example that made me smile. It was glorious; an “oh snap!” moment, for want of a better word.

Where the story ends up from where it begins is wonderful. The plot develops and takes you on one hell of a ride. I could go into more details, but it would be a shame to know more before you read it, and read it you should. This book gets a strong recommendation from me.