THE BLACKENING OF FLESH: Book Review 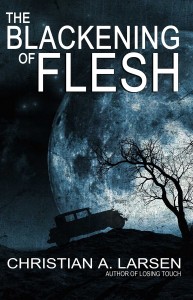 Jared Dix is a lonely, awkward teen with acne and no friends or social skills. The nightmare of being bullied and shunned at high school is finally over. His life changes when he meets Monica on a work delivery. She’s a college girl,  with a goth look and a passion for mafia history. He can’t believe she’s talking to him, let alone that she wants to be friends. Jared finds out that his house has a history. The house was the scene of a gangland massacre carried out by Al Capone’s gang fifty years prior. Jared’s life suddenly gets much more interesting.

Jared begins to investigate, mostly to get closer to Monica, and a mystery begins to unfold. He starts to have frequent dreams about the events that occurred in the house and they slowly begin to bleed through into reality. His family members become prone to not acting like themselves. He wakes up from dreams bearing physical bruises. The shared physical manifestations of the dreams are really well written with an increasing significance as the book continues.

I found Jared’s character to be the most fascinating part of the book. He comes across as a genuine and well-rounded character. I liked his awkwardness and his inner monologue about Monica, trying to avoid embarrassing himself, all the while being fascinated with her as a woman and what might be beneath her clothes. He’s so excited that a girl who is way, way out of his league is interested in him. This is authentic coming of age stuff. I would have liked to have seen more of Monica. She played a significant role before seeming to disappear for a large portion of the book. They made a good team and the story would have benefited from more of their interactions, especially as the climax arrived.

The book focuses a lot on the investigation into the gangsters and it’s interesting to learn about the particular mobsters in the Cerutti gang who died in the house. However, this does slow the story down a little in places. The horror is subtle and there is not much outright violence. It’s more on the creepy side. It’s a bit of a slow burn until we get into the supernatural and possession aspects for the final quarter of the book, which is the part I really enjoyed. I think your enjoyment of the book may depend on how open you are to the idea of old timey gangsters and their believability beyond the preconceptions and mobster images we might have. I liked the book but couldn’t really get fully on board with it, primarily due to the gangster characters. They are violent and intimidating but not really scary to me.