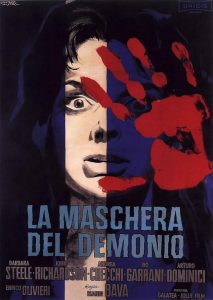 Inspired by nineteenth century gothic literature, Bava’s Black Sunday (La Maschera del Demonio) was released to modest acclaim in 1960. Vampires, with all their unearthly glamour, seem like a perfect fit for Italian horror, though Bava’s directorial debut owes more to the Universal monster movies of the 1930s. Although the film suffered from a huge amount of budgetary limitations, Bava’s direction is masterful throughout, drawing on a range of visual influences that include Slavic folk art, religious paintings and even Disney’s Snow White. The film is populated with ruined castle, crypts, and deep, impenetrable forests, and will undoubtedly appeal to fans of gothic melodrama and supernatural horror.

In fifteenth-century Moldavia, Princess Asa Vajda (Barbara Steele) is sentenced to death for practising witchcraft. She has a metal mask hammered to her face, and as she is burned at the stake, promises to return in the ‘mists of time.’ Vajda is reawakened by a doctor and his assistant two centuries later, and she promptly sets about draining the life of her descendent, Princess Katia (also played by Steele). The doctor’s assistant, Andre Gorobec, falls in love with Katia, and begins to unravel Asa’s curse in order to save Katia’s life – though Asa and her undead paramour will stop at nothing to fulfil the prophecy.

As you might have guessed, the plot is – for lack of a better term – a complete mess. In the first few minutes of the film, Asa is referred to as a witch, a vampire and an assassin, but Bava never makes any of this clear, simply insisting that she communes with the devil. The details of her curse – how she can be resurrected, killed, and what she actually plans to do – are similarly vague, and Bava often seems to be making it all up as he goes along. Of course, none of this is particularly important. Like many Italian horror films, the plot is only a framework on which to hang lush visuals and grisly murders, a loose structure for the audience to interpret however they choose. The gothic narrative of Black Sunday is well suited to this, as it only reinforces the oneiric, chimerical themes that are established throughout. 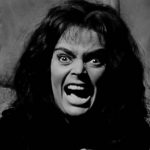 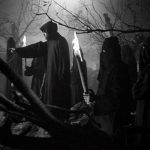 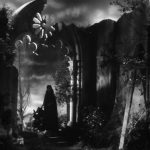 As Asa Vajda, Barbara Steele is phenomenal, her voice full of fire and music, where even a slight smile or a raised eyebrow can express an extraordinary depth of feeling. As Katia however, Steele lacks the subtlety to play such a simpering character, and the scenes between her and Gorobec are often too cloying to be memorable. The love theme that plays whenever they appear on screen together only exacerbates this, but since Katia does nothing but faint at every given opportunity, it’s never clear what they actually see in each other, or why Gorobec would go to such lengths to save her. In a film that draws so heavily on gothic melodrama, this should all be taken with a pinch of salt, but the fact that Bava spends so much time building atmosphere and so little developing characters makes this all the more noticeable.

The special effects – provided mostly by Mario’s father, Eugenio Bava – are both striking and inventive, and some of the sequences at the end of the movie are as impressive as any number of modern horror films. This is a story of women ageing in a matter of seconds, of skulls magically filling with insect-infested blood, of bodies seemingly crawling from the earth, all of which are enhanced by Bava’s black-and-white aesthetic. On a technical note, it should also be said that the Italian dub is far superior to the American one, which is poetic and elegant instead of cheesy and overbearing. This, of course, comes down to personal taste, but the American dub – with all its echoes and reverb – seems both dated and overworked. 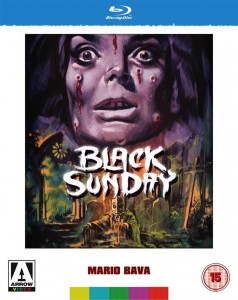 Black Sunday has enjoined something of a revival in recent years, largely thanks to Arrow’s Blu-ray release, as well as Mark Gatiss’ fantastic documentary A History of Horror. It is an excellent addition to the gothic horror sub-genre, comparable to the best Hammer films of the 1950s and 60s. Although Bava would go on to make stronger films, Black Sunday – thanks in large part to Steele’s Asa Vajda – still has the power to weave its spell.