Synopsis:
A family move into an abandoned orphanage and they soon learn that their charming orphanage has a disturbing history and is convinced they aren’t alone. 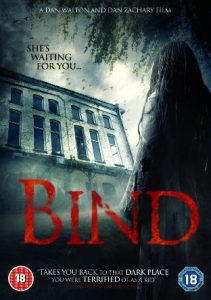 Bind is the supernatural chiller from Directors Dan Walton and Dan Zachary. Starring Chloe Bear, Lynn Csontos and Natasha Davidson, Bind is a film which treads on an oh so familiar path; an orphanage is abandoned after a ghastly series of murders but after a family of four move in what happens next will send them all running in fear as the past literally comes back to haunt them.

Kicking off with an opening scene that will surely leave more than a few jaws gaping open, Bind is a confused haunted house thriller that feels like a pound shop remake of The Amityville Horror. As a result it’s difficult to give credit to a film where everything seen on screen feels inherently familiar with each passing scene. Overall I found Bind to be incredibly slow and unbearable at times.

The characters are immediately unlikable and make some incredibly stupid choices which were utterly frustrating. Darren Matheson plays Ben, the patriarch of the family. His performance is okay at best. He tries to add intensity to his performance but never quite nails it. Lynn Csontos meanders through the film as his doting wife. Filling out the cast are Eliza Faria and Mackenzie 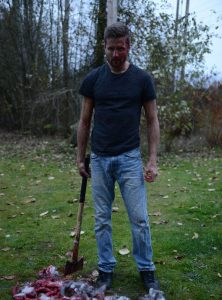 Mowat as their daughters Alyssa and Zoe. Not a single character has anything redeemable about them. Mowat’s performance as a bratty teenager flawlessly captured my feelings for this film; I was over it pretty much immediately.

As for the remaining 120 mins of the film, I was bored for the majority of it because it is entirely predictable and by the time the end credits began to roll I was left with an unquenchable thirst for something a little more gratifying. That said, the film would have worked better if it strayed from a tried and tested approach and dared to do something different. That said, there were even a couple of scares that work incredibly well but none of these moments do anything to help repair the damage caused by the directors decision to stay in familiar territory.