Bigfoot has been sighted a number of times in low-budget horror of late, be it in the minimalist found footage of The Bigfoot Tapes or the uneven but enjoyable silliness of Bigfoot Wars. The beast has most recently turned up in horror comedy Stomping Ground, and distributor BRINKvision have just put out this new clip to push their DVD release of the film. 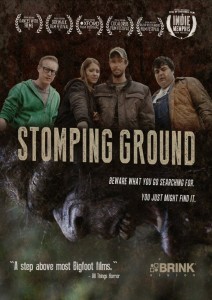 Stomping Ground is the story of Ben and Annie, a young couple on a weekend trip to Annie’s small North Carolina hometown. At the local bar they run into Paul, a charming old friend of Annie’s, and Ben learns something he never knew about his girlfriend: She believes in Bigfoot. In fact, she and her friends used to “hunt” for the creature when they were kids. Before Ben knows it, he’s off on an impromptu Squatchin’ trip deep in the Carolina backwoods. Amidst the Squatch calls, campfire stories and beers, Ben quickly realizes that Paul may have an ulterior motive in bringing Annie to the woods. And something else out here seems to be after her as well. Everyone but Ben thinks its Bigfoot. But it can’t be, can it? After all, Bigfoot isn’t real.

Directed by Dan Riesser, Stomping Ground put in a strong festival run back in 2014, so the recent home release has been a long time coming. John Bobek (When a Stranger Calls) and Tarah DeSpain (Burnout) lead the cast, which also includes Theresa Tilly, who played Shelly in Sam Raimi’s The Evil Dead.

You won’t catch a glimpse of ol’ Sasquatch in this clip, but there is an ominous tone as the group realises that the missing link may be hot on their heels.