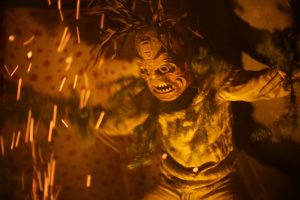 After playing a few hundred US cinemas for a one-night event a few weeks back, Patrick Magee’s Primal Rage will be heading to VOD platforms on May 1st, from Blue Fox Entertainment.

The film – which is not, unfortunately, based on the ‘90s beat-em-up of the same name – promises a fresh take on the Bigfoot legend, and features a couple coming face-to-face with a Bigfoot-type creature while on a supposedly relaxing getaway. It is the directorial debut of SFX and makeup artist Magee, who has worked on the likes of Alien Vs Predator and Beyond Re-Animator, and relies almost entirely on practical effects. Magee also co-wrote the film with Jay Lee.

Synopsis:
“A newly reunited young couple’s drive through the Pacific Northwest turns into a nightmare as they are forced to face nature, unsavory locals, and a monstrous creature, known to the Native Americans as Oh-Mah.”