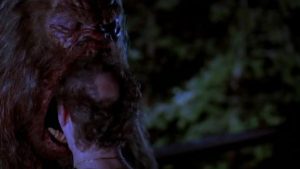 2006’s Abominable may be the most outlandishly gory Bigfoot film since onetime video nasty Night of the Demon and, like the ridiculous 1980 flick, has become something of a cult favourite. Fans of Ryan Schifrin’s bloody monster movie gem will be pleased to know that Abominable is finally heading to Blu-ray, courtesy of the MVD Rewind Collection. Check out the tasty artwork below.

Presented in a brand new HD transfer, the film comes loaded with extras but best of all, is a previously unseen extended cut, with all-new improved CGI effects, overseen by director Schifrin and Editor Chris Conlee! Cool, huh? 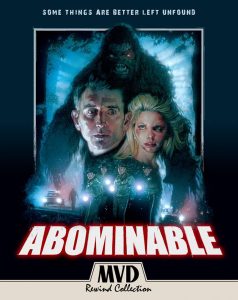 Synopsis:
After recovering from a horrific accident, paraplegic Preston Rogers moves back into the remote cabin where he and his now-deceased wife once lived. When his new neighbor Karen, is attacked by a gigantic creature, Rogers contacts the local authorities. But after the police and those around him dismiss Rogers as a delusional widower, he sets out to stop the abominable creature himself.