Big Hints Towards Further Sequels at The Conjuring 2 Premiere

Words thrown around at the premiere of The Conjuring 2 at the LA Film Festival suggest that further sequels to James Wan’s 2013 horror smash are looking very likely indeed. 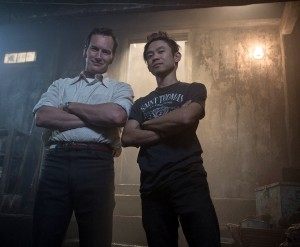 Talking from the red carpet at LA’s TCL Chinese Theatre, Wan said, when pushed by reporters on the likelihood of a Conjuring 3, that: “It depends on what happens this weekend.” With the film a near-guaranteed box office hit, you’d be either brave or foolish to bet against further chapters in the supernatural franchise. “There could be many more movies because the Warrens have so many stories,” the director added.

Screenwriters Chad and Carey Hayes are even more definite about an ongoing future for the series, telling reporters in no uncertain terms: “Yes, we definitely have a third in mind.”

The Conjuring 2 is already garnering almost universally favourable reviews. You can judge for yourself when the film opens this week in the US and across Europe, although UK audiences will have to wait until the 17th June.