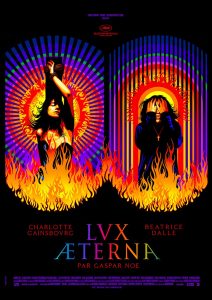 It’s strange to say that something that started life as a Yves Saint Laurent commercial will likely be one of the most distressing films you sit through this year, but Lux Æterna is exactly that—a beautiful, stress-inducing nightmare from Gaspar Noé that will make you laugh before leaving your eyes twitching and your mouth hanging open.

A mockumentary exploring the making of a movie about the witch trials, Lux Æterna stars Béatrice Dalle and Charlotte Gainsbourg as versions of themselves. Gainsbourg is preparing for her big scene in which she’ll be burnt at the stake, something which Dalle assures her will be very sexy. But this is not a fun set to be on: Dalle is butting heads with the producer and cinematographer who are plotting against her, Gainsbourg is being hounded by a desperate filmmaker and pushy journalist while receiving upsetting phone calls about an incident involving her young daughter at home, the crew and extras are complaining, and everyone is generally miserable and on edge.

Despite this, Noé’s script initially lulls us into a false sense of security by dedicating several of the film’s mere 51 minutes to a laid-back conversation between Gainsbourg and Dalle. Sitting in comfortable chairs by the fire, they drink and smoke, discussing embarrassing films and bad lovers in turn. But the conversation soon moves to the problems on set, teasing what’s to come, and when an assistant comes to collect Gainsbourg, things rapidly start spiralling out of control.

Noé’s use of split-screen storytelling turns the chaos on set into an overwhelming visual and auditory experience as we follow multiple people and pockets of drama, everyone talking over everyone else. The distinct colour schemes of each behind-the-scenes area—green, purple, yellow, red—and cinematographer Benoît Debie’s nimble camerawork make both halves of the screen interesting enough to draw the eye and leave viewers hesitant to look away from either, but Jerome Pesnel’s skilful editing ensures we stay attuned to any key information being shared. The tension ratchets up and up as the increasingly distraught Gainsbourg is gradually shepherded to her mark and chained to the stake, at which point something predictably goes horribly wrong, resulting in five seizure-inducing minutes of strobing lights and screaming women.

Lux Æterna is an uncomfortable watch in every sense of the word, and photosensitive viewers had best give it a wide berth. But if you don’t mind your eyeballs being assaulted, there’s something darkly amusing and more than a little horrifying in this short rumination on filmmaking and the women it sometimes exploits.