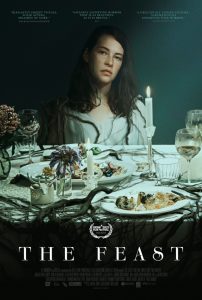 Between In the Earth and Gaia, it’s been a good year for eco-horror—and with extreme weather roiling all around us, it hasn’t come a moment too soon. Welsh-language film The Feast adds a new dimension to the subgenre, drawing on ecological themes and folk horror tradition to critique the gaudy wealth humans have accrued by plundering nature’s true riches with a quiet fury that radiates from every frame.

The feature directorial debut of Lee Haven Jones, who has previously worked extensively in television, The Feast is set deep in the Welsh countryside at the lavish home of corrupt politician Gwyn (Julian Lewis Jones) and his family. Their wealth is clearly new to them, with wife Glenda (Nia Roberts) commenting that the things they took from their previous farmhouse now feel primitive amidst this slick luxury. Yet, surrounded as it is by an endless expanse of lush, rolling hills, the expensive home feels like a mausoleum of glass and chrome, with cinematographer Bjørn Ståle Bratberg making exceptional use of the tight, low-lit corridors to create a feeling of intense claustrophobia whenever the family is inside. Glenda has even designed a near-pitch-black spa room that she says she likes to visit to “breathe,” seeming oblivious to the fact that she could simply go outside. Her neighbour Mair (Lisa Palfrey) rightly points out that the room is “like a cell”—one that Glenda has built for herself, brick by brick, through her immoral choices.

Those choices are gradually revealed over the many courses of the dinner party the family is throwing for down-to-earth Mair and unscrupulous businessman Euros (Rhodri Meilir). To help them out, they’ve hired a local girl, Cadi (Annes Elwy), to serve as a waitress, but it’s clear from her arrival that something is… off. Barely speaking, trailing soil, and with a distant stare, Cadi feels like an alien in the modern space, disturbed and fascinated by the opulence around her in equal measure. And while Roger Williams’ screenplay never seems particularly interested in pulling the rug out from under viewers with a big twist, instead glueing us to our seats through creeping mood and ratcheting tension, the final acknowledgement of who Cadi is feels both satisfying and earned. The character is (intentionally) something of a blank slate, but Elwes does a superb job playing up the unsettling touches—like a sudden burst of laughter—that serve to make Cadi feel unpredictable and dangerous.

Jones’ patient direction allows the eerie story to unfurl like the petals of a poisonous flower, with characters gradually damning themselves as their backstories and motivations come to light. When the slow burn eventually blossoms into an unquenchable fire, viewers are rewarded with a suitably bloody and brutal climax, including one gore shot involving maggots that will leave you squirming. But the film seems to lose faith in itself towards the end, even feeling the need to flash back to an earlier scene involving a piece of broken glass before the payoff is revealed. It dampens the impact that the (quite unforgettable) set-up might have had if viewers had been left to figure out for themselves what was going on—and in a film as confident as this one, such stumbles are keenly felt.

Still, despite some timidity in the final act, The Feast is a sumptuous and haunting slice of eco-horror that makes the most of its limited setting and cast. Pitting new money against a force as ancient as the hills, the film isn’t exactly subtle in its messages about environmental destruction and greed, but the artful filmmaking will keep you at the table nonetheless.