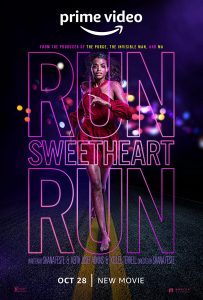 One of many films that had its release date dramatically delayed as a result of the pandemic, writer-director Shana Feste’s Run Sweetheart Run finally debuted on Amazon Prime Video this October, having undergone a few reshoots since its world premiere. But was it worth the wait?

The film stars Ella Balinska as Cherie, a single mother working in the kind of corporate environment that outwardly celebrates its commitment to diversity, equity, and inclusion while internally letting casual sexism go unchallenged. When her boss asks her to stand in for him at a one-on-one dinner with wealthy client Ethan (Pilou Asbæk), Cherie is charmed by the man and allows herself to be coerced into going home with him for one more drink. But no sooner has the door closed than things take a nasty turn.

Suddenly, Cherie is running for her life from a creature that can literally smell her blood. And that’s a real problem considering she’s not only injured, but also on her period.

Run Sweetheart Run is a fun yet frustratingly uneven film. After a superb first half filled with some pulse-pounding chase scenes, the script starts to stumble as Ethan’s exact nature and back story are revealed. The mysterious First Lady (Shohreh Aghdashloo), who has been teased throughout the film, finally shows up only to spout exposition before the climax, leaving what seemed like a fascinating plot thread feeling threadbare.

The commentary about what it’s like to exist as a woman in the modern world is equally uneven. While the examination of the evils of the patriarchy is a little too on the nose to be truly scathing, Feste peppers in plenty of moments that capture common experiences of womanhood, from the frustrations of your period starting at exactly the wrong moment to the everyday horrors of an unknown man walking behind you at night. The use of Cherie’s period as a plot device is also handled with a refreshing lack of squeamishness, and one particular moment involving a tampon will leave you laughing and cheering.

And that’s one of Run Sweetheart Run’s biggest strengths: it knows how and when to be funny. Playful touches are used sparingly enough to be surprising and delightful, like the command “RUN!” flashing on screen in bold red letters and Ethan stopping the camera in its tracks before closing the door on the viewer. Those playful moments are juxtaposed with shocking violence; Ethan shuts the door before first attacking Cherie, leaving us listening helplessly outside as he does something unspeakable to her. The film is fun right up until the moment that it’s not, much like Ethan himself.

Run Sweetheart Run’s mythology is underbaked, but its balance of playfulness and brutality makes for an enjoyable watch. As he proved in Overlord, Asbæk can play a fantastic villain, proving especially intimidating in an early scene at the police station. As for our main character, Balinska is instantly likeable as Cherie, and it’s impossible not to root for her as she transforms into a blood-soaked, battle-scarred heroine ready to kick Ethan where it hurts.