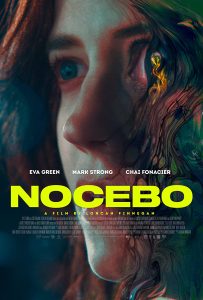 Director Lorcan Finnegan (Vivarium, Without Name) returns for his third feature film with Nocebo, an Irish-Filipino co-production that explores the evils of capitalism through horrific, haunting imagery and sly subversion of horror tropes.

Eva Green stars as Christine, a designer of expensive-looking children’s fashion. She’s got it all: a handsome husband, Felix (Mark Strong), a bright young child, Roberta (“Bobs” to her friends, played by Billie Gadsdon), and a big, beautiful house in the city (the film was shot in Dublin, though the exact setting is left vague). Being a career woman means home life is a little hectic, but overall, she seems to be enjoying an existence of comfortable affluence and success. That is, until a mysterious phone call interrupts her latest fashion show, quickly followed by a bizarre encounter that triggers an illness as debilitating as it is mysterious.

Before long, Christine is waking up in the night sweating and struggling to breathe. During the day, her body is wracked by sudden muscle cramps and spasms that her dozens of pill bottles don’t seem to help, while her cognitive functions seem to be slipping. Her perfect life is falling apart—so when a Filipino carer, Diana (Chai Fonacier) shows up on her doorstep claiming she was called, Christine accepts the help without asking too many questions.

Nocebo is a film that lays its cards on the table fairly early. Viewers paying attention to the context clues can quickly piece together why Diana is really there and what great sin lies at the heart of the story, though the eventual reveal adds distressing details to the framework we’ve foreseen. At the same time, the script (co-written by Garrett Shanley and Ara Chawdhury) subverts our initial expectations about where to place our suspicions and sympathies, even shifting the focal character with a series of flashbacks that make it clear whose story we’re really here to see.

Fonacier brings an element of self-aware humour and righteous anger to a role that could all too easily have come across as just another vilified foreign “other.” This is highlighted by the undercurrent of casual racism that runs through Christine and Mark’s interactions with Diana. The couple is quick to label Diana’s rituals and beliefs (which are deeply connected to family and healing) as “woo-woo,” treating them with barely masked scorn. This is contrasted with Christine’s own (far more self-serving) ritual involving her lucky red shoes. It’s telling that her belief system is tied to material items, which are both a mark of her wealth and a cause of her downfall—just as it’s telling that she’s willing to plunder the eastern culture she patronises as soon as it becomes useful to her.

Nocebo’s critique of capitalism isn’t always subtle, but it drives its point home with some truly discomforting horror set pieces that will stick with viewers. Green’s often (fittingly) ugly and hysterical performance is perfectly balanced by Fonacier’s knowing and self-assured one, and watching Diana reel Christine in and help her tie her own noose is satisfying yet harrowing. The end result is a movie that, while largely predictable, still leaves us waiting for the other shoe to drop with both gleeful anticipation and growing dread.