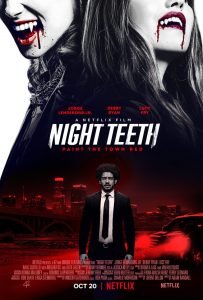 “You made books and movies about us and got most of the details wrong,” a vampiric voiceover tells us at the start of Night Teeth, Netflix’s new action-horror film from director Adam Randall. Sadly, the proceeding movie fails to live up to the promise of something other than what we’ve seen before, instead relying on existing vampire lore and a done-to-death plotline about a bloodsucking upper class.

Night Teeth revolves around Benny (Jorge Lendeborg Jr.), a student and aspiring musician living with his grandmother (Marlene Forte) in Los Angeles. When his brother Jay (Raúl Castillo) is unable to fulfil a chauffeuring gig, Benny poses as him, driving two wealthy women—Blair (Debby Ryan) and Zoe (Lucy Fry)—around the city for a night of partying. What Benny doesn’t realize, however, is that Jay is one of few humans involved in upholding a fragile truce with the gangs of vampires that run the city in secret—a truce that his party-girl passengers are intent on breaking on behalf of their master, Victor (Alfie Allen).

There’s a lot of backstory gestured at in Night Teeth, but the script—penned by Brent Dillon—struggles to bring it to life in a coherent way. As a result, characters wind up regurgitating exposition to fill in the gaps and the lines between the various gangs feel fuzzy at best. There was a real opportunity to make each group of vampires feel unique and interesting, but—barring Alexander Ludwig’s breath-of-fresh-air appearance as the oddball Rocko—few stand out from the crowd. It doesn’t help that Megan Fox and Sydney Sweeney’s all-too-brief appearance as members of the upper echelon ends with an off-screen fight scene, robbing the pair of much of the campy fun they might have brought to their roles. And that’s one of the biggest problems Night Teeth wrestles with: it always feels like there’s something more exciting going on beyond the frame.

Still, the film is rarely dull, constantly moving from location to location and making the most of the city’s neon-drenched nightclubs and distinctive street art. Lendeborg Jr. is also an infinitely affable presence, imbuing Benny with a naive charm that makes even his lacklustre romance with Ryan’s Blair feel somewhat sweet. It’s unfortunate for Ryan that she’s saddled with some of the script’s clunkiest monologues, because she and Fry are clearly having a good time chewing every neck—and some of the scenery—in sight.

Stylish but ultimately anaemic, Night Teeth’s tendency to tell rather than show robs it of much of its joy. It’s an enjoyable enough popcorn flick for a Saturday night, but the fact that it borrows liberally from better movies has the inadvertent effect of making you frequently think about what you could be watching instead.