[BHFF] ALL JACKED UP AND FULL OF WORMS: FILM REVIEW 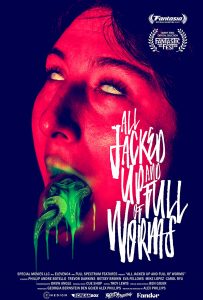 Few films released his year are likely to be as divisive as All Jacked Up and Full of Worms, the feature debut of writer-director Alex Phillips. Intentionally abrasive yet bursting with bizarre humour, it’s a love-it-or-hate-it affair that will leave you wondering what the hell you just watched if you stick with it to the sticky end.

The film follows Roscoe (Phillip Andre Botello), a maintenance man at a seedy motel frequented by sex workers and their strange clients. In his home life, Roscoe seems to be the third wheel in a cultish throuple, an arrangement that clearly isn’t bringing him much happiness. Is it any wonder he decides to try a new drug that one of the hotel’s patrons, Benny (Trevor Dawkins), introduces him to? And did I mention that that drug happens to be live earthworms?

All Jack Up and Full of Worms is a movie made by people who clearly have experience with addiction. The film plumbs the depths of drug-fuelled depravity, showing the lowest lows and moments you cannot help but laugh at. We’re treated to a cavalcade of despicable yet entertaining characters getting worms into their bodies any way they know how, up to and including snorting them and literally pressing them into their veins. The sight of a fat, wriggling earthworm hanging from a character’s nostril is enough to make anyone squirm, but you’ll be laughing uncontrollably all the same.

Like all good drug trips, Roscoe and Benny initially have a groovy time on worms, but things quickly spiral into dangerous territory. There’s some satire here of cautionary-tale narratives, the situation reduced to abject silliness by the nature of the drug itself. But All Jacked Up and Full of Worms also slots into the sub-genre of psychedelic drug-induced horror films, its story intersected by snippets of a man talking about his transcendent experience on worms, all while its characters are plagued by visions of a giant floating one.

That oversized worm is just one of many delightfully DIY effects seen in the film, which wears its indie budget proudly on its sleeve. What the crew achieved is a slimy triumph; there isn’t a single surface on screen that you’d want to touch. That said, one of the most prominent homemade props is also undoubtedly one of the film’s most divisive elements since it relates to paedophilia. It’s uncomfortable, which is the point, but it doesn’t seem to have much purpose other than to be shocking. In a movie that was already transgressive to the point of grotesqueness, it almost feels like overkill.

All Jacked Up and Full of Worms is the kind of film that takes time to process. You can tell that everyone involved was giving it their all, but it may take you a few days to discern if you actually enjoyed what they created or not. My advice? Just let yourself get wriggly with it and, at the very least, you’ll have a weird story to tell your friends.