Bernard Rose’s Frankenstein Will be Released in February

One of our favourite films from last year was Bernard Rose’s (Candyman) inventive and gory Frankenstein adaptation, so it gives us great pleasure to announce that the film is set to be released very soon. Courtesy of Signature Entertainment, Frankenstein will be released digitally on 15th February and on DVD and Blu-ray on 22nd February in the UK. Additionally, Alchemy will be releasing Frankenstein in the USA on 23rd February. 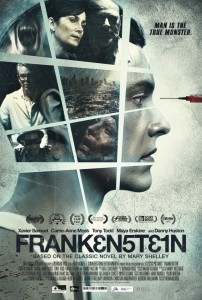 Synopsis:
Frankenstein is set in present day Los Angeles and told entirely from the perspective of the Monster. After he is artificially created, then left for dead by a husband-and-wife team of eccentric scientists, Adam is confronted with nothing but aggression and violence from the world around him. This perfect creation-turned disfigured monster must come to grips with the horrific nature of humanity.

Watch the trailer below, which stars Xavier Samuel (The Loved Ones) in the role of the monstrous creation.

You can read our overwhelmingly positive review for Frankenstein here. SCREAM gets a nicely-placed position on the DVD and Blu-ray cover as well, which you can take a look at right here. Be sure to add this to the top of your horror purchases list, because it’s a must-see.