Wednesday brought with it the hugely saddening news of the death of character actor Michael Parks, who was 77. A particularly engaging presence whenever he graced the screen, Parks was a truly gifted performer who was perhaps best known to modern audiences for his work with Quentin Tarantino, who not unreasonably, considered him the greatest actor of his time. 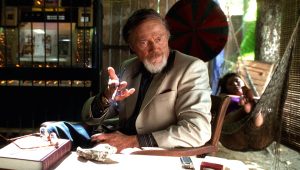 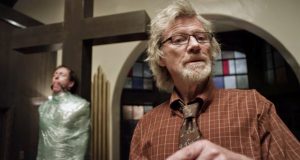 Parks began his career with a string of TV roles throughout the early 1960s and scored his first leading film roles with the likes of teen romance Wild Seed in 1965 and counter-culture crime caper The Happening in ’67. Parks remained busy and prolific throughout the following decades, but surely began a new stage in his career playing Canadian drug runner Jean Renault in David Lynch’s Twin Peaks. A handful of genre roles followed, building to Robert Rodriguez’s From Dusk Till Dawn, in which Parks stole the show as Texas Ranger Earl McGraw, a role he would reprise in Tarantino’s Kill Bill: Vol. 1. He returned for Kill Bill: Vol. 2 with an equally strong performance, albeit as a different character, Esteban Vihaio. Earl McGraw was not done however, returning in both Grindhouse segments, Death Proof and Planet Terror.

Parks still had more genius to dish out, joining with Kevin Smith for the director’s horror reinvention, and was absolutely mesmerising as cult leader Abin Cooper in 2011’s Red State, and as Howard Howe in follow-up Tusk, a film that rested entirely on his performance. Smith was among many to pay tribute to the celebrated actor on Wednesday, writing via Instagram:
“Michael was, and will likely forever remain, the best actor I’ve ever known. I wrote both Red State and Tusk FOR Parks, I loved his acting so much. He was, hands-down, the most incredible thespian I ever had the pleasure to watch perform. And Parks brought out the absolute best in me every time he got near my set…He elevated any flick or TV show he was in and elevated every director he ever acted for. I was so fucking blessed to have worked with this bonafide genius. But really, I was just lucky to have known him at all.”

Parks will be sorely missed, and never forgotten. He is survived by his wife Oriana, whom he married in 1997, and their son, the actor James Parks.