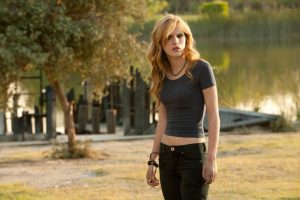 Another cool looking genre flick picked up before heading to EFM is Unified Pictures’ psycho-thriller Ride, the international sales for which will be handled by Blue Fox Entertainment.

Writer/director Jeremy Ungar makes his feature debut with the film, which is headlined by rising genre star Bella Thorne (Amityville: The Awakening, The Babysitter).

Synopsis:
The film takes place over the course of one night in Los Angeles as a young woman hails a ride on an app unaware that she will be joined by a sociopath.

Thorne is joined by Jessie T. Usher – star of the upcoming Shaft and Garth Ennis TV adap The Boys – and Will Brill (The Eyes of my Mother). Unified’s Keith Kjarval and Tyler Jackson are producing with Sefton Fincham of Look To The Sky Films.

“This edge-of-your-seat thriller shows the dangers that lie at our fingertips every day in our complex technology-obsessed society,” said Blue Fox’s head of international Lisa Gutberlet upon their acquisition of the film.