Behind the Lens: Ryan M. Andrews’ Save Yourself 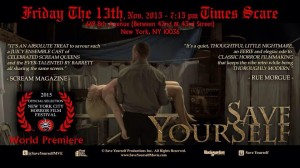 SCREAM recently shared the trailer for Canadian scribe/director Ryan M. Andrews’ latest genre venture, Save Yourself, and now, mere days away from the world premiere, Post City Films has unleashed a plethora of additional behind-the-scenes material.

Starring Tristan Risk (The Editor), Jessica Cameron (Truth or Dare), Tianna Nori (The Demolisher), Elma Begovic (Bite), Ry Barrett (The Demolisher), Sydney Kondruss (The Drownsman), Caleigh Le Grand and Bobbie Phillips, Save Yourself follows five young starlets as they head off to L.A. to screen their latest genre flick only to find themselves caught up in a sinister scientist’s schemings when they stop off at a seemingly sleepy town.

The film’s world premiere takes place on Friday, November 13th as part of the New York City Horror Film Festival held at Manhattan’s Times Scare, a year-round haunted attraction running in one of the most haunted buildings in the nation. This will then be swiftly followed up at the Blood in the Snow Canadian Film Festival with a sold-out screening on Saturday, November 28th and an encore screening scheduled for Sunday, November 29th. If you still haven’t grabbed your tickets, act fast and nab them while you can here (https://www.universe.com/events/blood-in-the-snow-canadian-film-festival-2015-tickets-toronto-GVYT6).

In anticipation of the impending festival dates we’ll leave you with the behind the scenes cast and crew preview videos.

You can also save yourself from having to search the net for updates by staying connected with the film at the following links: