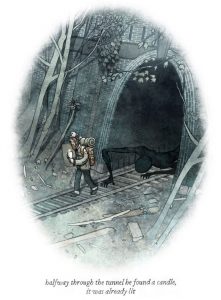 Imagine you’re walking down an empty city street. It’s dark and cold and you’re the only one around. As you scurry to your car with your collar turned up against the wind and your chin buried in your jacket, you pass by a dark alley, so dark, that you can’t see more than a few feet into it. A chill crawls up your spine. You’re pretty sure there’s nothing in there watching you, staring at you as you briskly walk past its territory, but you just can’t be sure. Especially when the footsteps start.

Behind You, a one man compilation of micro horror stories, plays on the fear of thing in the shadows. A clever and unnerving collection of shorts, the work steps back from traditional, long winded horror and makes a story of one sentence and one drawing. The comic takes everything that ever scared a person as a child and smooshes it into those silent, haunting creatures that only exist in the edges of our peripheral. With a wonderful, if not slightly over-stylised art style, the collection is surely on its way to being a horror classic. 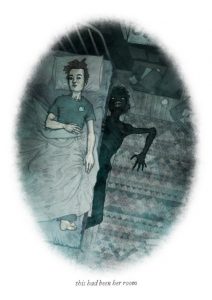 The comic, though perhaps closer to a picture book than a true comic book, explores different ways to frighten the reader. One mini-verse had the text: “would he ever get used to this place he calls home? countless others had over the years” with an accompanying picture of a new tenant looking around his new apartment, blissfully unaware of the moaning spirits pressing against the walls behind him. Another had a man watching shows on a laptop in the middle of the night with a dark shadow creature hanging over him in the corner, a previous page explaining “i decided to stay up all night. i would avoid those dreams altogether.” While most will feature a recognisable place or scenario, a few are arbitrary to both place and person, such as a figure lost in a maze with a secondary figure following ‘still behind you.’

Behind You is a very unique addition to the horror genre. As stated, it doesn’t focus on a slow burn or a lingering mystery. It doesn’t allow the reader to resolve their fear at the end when the killer is unmasked as dead kid or a pumpkin head or three babies in a jacket. There’s no solution. You can almost treat these as the stories of the first victims. The unfortunate fatalities in every story that are needed to die before the problem is addressed. Of course, for them, they get no resolution, no answer to their why. They simply live, see a monster, and are gone. But, then again, perhaps these tales could also be seen as small urban legends. Don’t go out on your own, don’t knock on strange doors lest the monsters get you. But this reviewer likes to take the easiest route and simply see the stories for what they are. Creepy things that crawl in the dark. The monsters and ghouls that shaped our imagination as human beings and reminded us that there are more things that we can’t see than we can. In fact, it’s probably all these solutions that give Behind You it’s real charm. It can be whatever you want it to be and these horrors can exist however you want them too. They’re still gonna get you, but at least you can try to mould some sense into your demise. 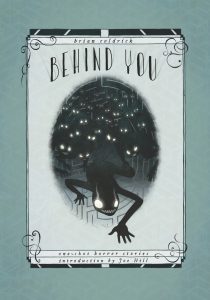 Both the art and writing is done by illustrator Brian Coldrick and was initially released as a web comic on patreon.com before being collected by IDW Comics. Unfortunately, the art is a bit of a mixed bag, not due to quality but because of the style chosen for the work. The illustrations are definitely stylised in a more modern look and tend to come off as less horror and more all-ages spooky. The creatures themselves have a wonderful stretched and shadow look that work beautifully with the work and most are genuinely creepy, but the actual victims maintain a cartoonish look that takes away a bit of the horror angle. It’s a good, professional work by a man who knows how to illustrate, but the style seems to rub wrong with what the work is trying to do. Not always, but sometimes. Otherwise, it’s a sold piece of horror that should definitely be on everyone shelves by Halloween.