What We Become Spreads the Infection in May 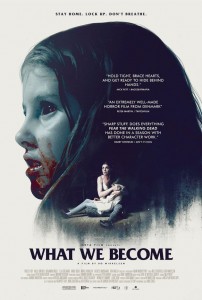 IFC Midnight continues their North American dominance of interesting indie horror releases, with Danish virus flick What We Become. The film will receive a limited theatrical run (in New York and LA), as well as a VOD release on Friday, 13th May.

The film (original title: Sorgenfri) played a number of festivals last year, including the London Film Festival in October.

The Johansson family’s idyllic summer is brought to an abrupt halt as deaths stack up from a virulent strand of the flu. The authorities start off by cordoning-‐off the neighbourhood, but soon panic and force the inhabitants into quarantine in their hermetically- ‐sealed houses. Isolated from the rest of the world, teen Gustav spies out and realises that the situation is getting out of control. He breaks out, but soon the family of four comes under attack from the riotous, blood-‐thirsty mob who forces them to the extreme to escape alive.

What We Become is the feature debut for director Bo Mikkelsen, and stars Mille Dinesen, Marie Hammer Boda and Troels Lyby, who also starred in Lars von Trier’s controversial comedy classic The Idiots.