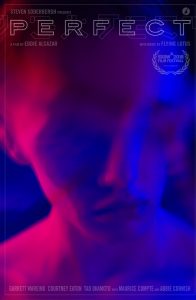 An eerie poster has just been released for sci-fi body shocker Perfect, ahead of the film’s premiere at this year’s SXSW Festival.

Perfect is the feature directorial debut of Eddie Alcazar, who produced the weird-as-fuck 2017 modern midnight movie favourite Kuso. On producing duties is Steven Soderbergh, the Oscar-winning director of Solaris, Traffic and Contagion.

Synopsis:
A boy in a cold and stark modern house, in a vaguely science fictional world, is seduced by advertisements of perfection to install implantable characteristics directly into his body. The implants heal his dark, twisted visions, but come with a corporeal cost. He persists on applying them, hoping to reach perfection, but ultimately he discovers that purity of mind is not exactly as he’s imagined.