Beautifully Brutal Images from Attack of the Lederhosen Zombies

This looks like my dream zombie film. The combination of gore, humour and self-awareness looks practically perfect in every way. Check out the trailer below to see what I mean. It looks like a bloody brilliant blast of zombie mayhem and we can’t wait to catch it when it screens at Horror Channel’s FrightFest in London this August 28th. 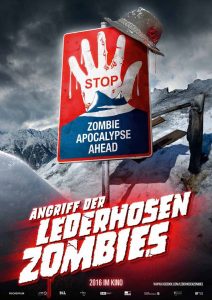 Synopsis:
When a pro snowboarding dude takes a practical joke too far, he loses a lucrative commission, his girlfriend, his job and everyone’s respect. Winning any of these things back would be eas- ier if he and his friends weren’t marooned in a high-alpine ski-tavern surrounded by drunken revellers celebrating the longest night of the year. When the revellers rapidly start turning into zombies, our hero is in serious danger of losing his sense of humour.

If you liked the two zomedies Dead Snow and Dead Snow: Red vs Dead, this should be right up your alley as it channels the same level of dark humour and excessive gore. The images below also show-off the film’s surprisingly impressive visual style, so it looks rather beautiful. As far as blood-splattered body parts and gruesome zombies go.