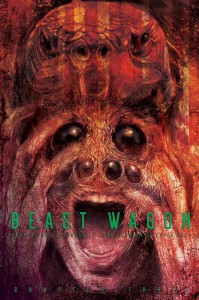 Beast Wagon, the deliciously twisted brainchild of Owen Johnson and John Pearson, is a comic whose reputation precedes it. The book achieved its Kickstarter goal within 24 hours, and was consequently nominated for a British Comic Award last November. With the release of the third issue this month, Beast Wagon mutates into a much darker and stranger animal, incorporating – for the first time – some truly horrifying moments.

The story is centred around the fictional Whipsnarl Zoo and the various animals that inhabit it, but you would be wrong to mistake this for something saccharine or twee. This is a series where animals discuss prophetic dreams, tell scatological jokes, and pontificate about the humans who come to visit them. We’ve already met messianic lions, lovelorn hippos and proselytising apes, but issue three is where the humans take centre stage, focusing on tortured writer Patrick as he undergoes a drug-induced vision quest.

The incantatory elements of Johnson’s writing enables Pearson to create some of his best work, with images – layered beneath swathes of unexpected colours and textures – that take on an almost hallucinatory quality. In these dream sequences, Pearson’s art is more akin to the images of a tarot pack: oneiric and obtuse. At the end of issue two, in which Patrick is possessed by the totemic spirit of the tarantula, Pearson displays some of his most nightmarish work to date. By the end of the third issue, a rather disgusting nod to Cannibal Holocaust, it is clear that the story will only get more horrific in the next three issues. 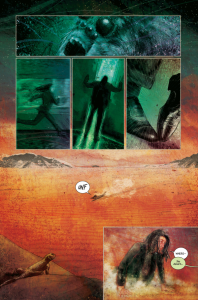 Yet Beast Wagon suffers from a distinct lack of focus. With so many characters, Johnson doesn’t allow us to fully understand any of them, especially as the initial protagonists become superfluous as the story progresses. Almost four pages are dedicated to a goat biting a child’s finger, and since this moment seems to have no bearing on the narrative, it begs the question as to whether this space could have been used more effectively elsewhere, namely on making us really care about the central characters.

In his hallucination, we learn that Patrick had dreams of becoming a writer when he was a little boy, and in a flashback, we see him telling his parents the story of Beast Wagon. It’s a fun, self-referential moment, but one which might have been better used as an opportunity to make Patrick less two-dimensional. This, if looking at it cynically, is the worst thing about Beast Wagon: it has intelligence and wit where its heart ought to be. 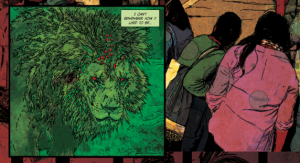 But to think of it this way is to ignore the things which make it great. Johnson’s prose – which fluctuates between beat poetry, tribal spell-casting, and charmingly juvenile joke-telling – is consistently strong throughout, making Beast Wagon one of the strangest and most ambitious indie comics of the last few years. With some sharper editing in the final three issues, Beast Wagon has the potential to be far more than the sum of its parts. It is delirious and disquieting, and I can’t wait to see where it goes next.