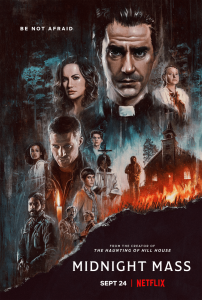 Mike Flanagan (The Haunting of Hill House) is bringing another horror series to Netflix in the form of Midnight Mass—and the key art from the series tells us to “be not afraid.” Somehow, we don’t believe it…

Flanagan directed all seven episodes of Midnight Mass, which tells the tale of a small, isolated island community whose existing divisions are amplified by the return of a disgraced young man and the arrival of a charismatic priest. When Father Paul’s appearance on Crockett Island coincides with unexplained and seemingly miraculous events, a renewed religious fervour takes hold of the community. But do these miracles come at a price?

Attend the Midnight Mass on Netflix from September 24th.