The Battle Continues with the Trailer for Underworld: Blood Wars

Come and get it; it’s the trailer for Underworld: Blood Wars and it is pretty epic. You’ve always got to be a bit cynical when you get to the fifth instalment of a franchise, because you have to question the motivations of those behind the film. It’s all about the money, right? However, I’m a sucker for the Underworld films and I even found Awakening slightly entertaining. Of course, the strongest of the bunch is the first from 2003, but I’ll always be eager to see Kate Beckinsale don spandex, pick up a couple of guns and rain hell down on those that get in her way. 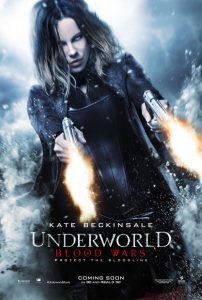 The trailer for Blood Wars is exactly what you’d expect. There are plenty of spectacular action sequences and Selene (Beckinsale) is back doing what she does best. There are many teases of the direction the film is heading in, giving us a good look at the present and future of the vampire Death Dealer.

Underworld: Blood Wars has been directed by Anna Foerster, who is also behind the sequel to the sci-fi actioner Source Code. Blood Wars additionally stars Theo James, Lara Pulver, Alicia Vela-Bailey, Charles Dance, Tobias Menzies and Bradley James. It will be released on 6th January 2017 in the USA and 3rd February in the UK.