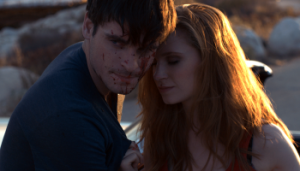 Synopsis:
Five strangers arrive at a motel in an isolated town, but are thrown together when a masked murderer starts a killing spree.

After watching the trailer for Bastard I readied myself for an intense, non-stop rollercoaster ride of death and bloody mayhem. Instead, I was sadly greeted by a surprisingly tame and quite convoluted story that overflowed with different narrative strands and left me feeling knackered for all the wrong reasons.

Bastard begins promisingly and sets a tone that suggests it’s going to be a relentless, violent throwback to ‘80s exploitation. We are introduced to a couple of young serial killers who are out on the road and Bastard will undoubtedly remind you of Oliver Stone’s Bonnie and Clyde-esque thriller Natural Born Killers. It’s darkly comic as the couple play rock, paper, scissors to decide who gets to kill next and the desert landscape could have been ripped straight from Stone’s frenzied piece of satire. The killer lovers’ first victim has his head smashed in by a hammer, but instead of giving the audience a close-up of the kill in all its gory detail, the camera provocatively pulls away to put us in the perspective of a voyeur. It’s the perfect tease for the anticipated violence to come and an aggressive soundtrack kicks in that further promises that this is going be an enjoyable assault on us, as well as the characters.

This film is definitely a brave endeavour and many will shy away from its unabashed bad language that includes more than a few mentions of the C word, as well as quite shocking violence. However, those who are no stranger to exploitation cinema and are frequent viewers of the most grisly horror films may admire Bastard’s intentions to be bold and brash, but will probably find it fairly tame and lacking a true punch. It may hold a barefaced title that hints at shameless brutality, but Bastard does not entirely meet expectations despite its, at times, gratuitous violence and nudity. That isn’t to say the film doesn’t offer moments that will make you squirm in your seat, but as a whole, it does not manage to be the hard-hitting gore-fest it so desires to be.

As a throwback to 80s slashers, Bastard does well at channelling a retro vibe through its synth-heavy soundtrack. The music is the best part of the film as it amplifies Bastard’s energy and gives the film an overwhelmingly intense atmosphere. It may not deliver the gore for gore-hounds, but the score is a relentless punch to the gut that makes up for the times where Bastard lacks in physical aggression. Beginning as a road movie, Bastard soon abandons this approach before becoming a full-blown slasher that sees the masked murderer knocking off its victims in way that would make Jason Voorhees envious. It may not be set in the traditional cabin in the woods, but there is an unmissable eagerness to remind its audiences of classic slashers like Friday the 13th and Halloween through its shaky camera work and point-of-view that frequently implies a lurking, sinister presence. 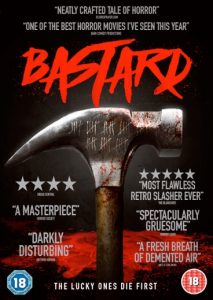 In terms of story, Bastard is unnecessarily complex and this is where most of the film’s problems lie. Instead of successfully meshing the different stories, identities and personalities of its various characters in a flawless manner, Bastard’s attempt at bringing its characters together feels heavy-handed. As expected, most of them are little more than objects to be killed, so the need to have a personal insight into their lives feels like a noticeable attempt to garner an attachment to characters we know are about to be killed. If we were able to spend a little more time with these people, perhaps there would have been more of an impact on the audience when they were killed. However, as it stands, their individual stories feel under-developed, causing the overall narrative to feel messy and without a clear direction. At only 80 minutes long, Bastard does not give itself the opportunity to fully explore the complexities of its characters’ identities or piece together the intricacies of its overall puzzle. There is something to commend in its core idea to not simply kill hapless nobodies and to offer separate, interesting stories, but you’ve got to give yourself the time to do so. Bastard’s failure to jump between characters without interrupting the film’s flow leads to a poorly-paced, disjointed plot that is filled with way more than the film can handle.

It’s a promising debut from directors Powell Robinson and Patrick Robert Young, but Bastard feels like it is being pulled in far too many directions and would benefit from a tighter storyline. Is this a case of too many cooks or, in this case, directors in the kitchen? Perhaps. Far from terrible and mightily watchable, Bastard has a lot of potential but will leave you feeling underwhelmed.