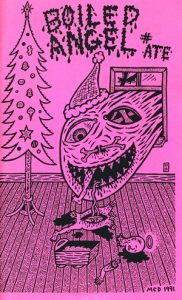 In 1994, 21-year-old underground comic artist Mike Diana became the first – and only – artist in US history to be convicted of obscenity. The focus of the charges was Diana’s hand-made ‘zine Boiled Angel, which featured outrageous, graphic artwork detailing extreme acts of sex, violence and depravity. With a print run of just 300 copies however, the comic was sold only to adults by mail, and never intended to sit in stores or on racks. Seen by most as a true affront to the rights supposedly protected by the First Amendment, Diana’s conviction saw the artist spend four days in jail, fined $3,000 and – incredibly – prevented from drawing anything, even in his own home!

For the first time, Diana’s story is to be told in a documentary directed by legendary cult director Frank Henenlotter (Basket Case, Brain Damage, Frankenhooker). The Trial of Mike Diana is currently in the midst of a Kickstarter funding campaign, and has already begun production, with the involvement of Diana himself. A true independent production, the film will not shy away from exposing the truths about the trial, or indeed from showing Diana’s art in all its disturbing glory.

The film puts a heavy focus on what the First Amendment truly means in practice, and the hysteria and moral panic that saw a community turn against this young man. Unbelievably, the authorities even considered the possibility that Diana was the serial killer plaguing nearby Gainesville at the time.

“Freedom of Speech doesn’t mean anything if your art is declared ‘obscene’,” says Henenlotter, “and one man’s art could be another man’s obscenity. That’s the battle we explore in this documentary: an improbable collision between comic-book art and the First Amendment.” 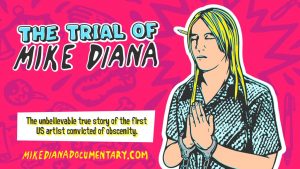 The Trial of Mike Diana is produced by Anthony Sneed (who produced and acted in Henenlotter’s Bad Biology and upcoming Chasing Banksy), Mike Hunchback (author of Pulp Macabre: The Art of Lee Brown Coye’s Darkest Era and Screeching Weasel guitarist) and Caitlin McGurk, an Assistant Professor at the Ohio State University Billy Ireland Cartoon Library and Museum.
The Kickstarter campaign offers a variety of awesome rewards for backers. You can donate here.