Five years later, the disappearance has left the family in shambles. A step-mother who won’t leave the house, a mourning father struggling to pay the bills while Ben continues searching daily for his little brother. While Eric is still a subject of a missing children’s case, Ben finds a job as a graveyard-shift stocker in the very grocery store his brother went missing.

At first the menial job seems routine but Ben quickly begins to sense an eeriness and feeling that something at the store is wrong. A verbally abusive boss. Phones ringing in the middle of the night, distant ghostly voices on the other line. An elderly baker who talks to herself. The closed off mysterious rooms upstairs. A toy of Eric’s from the day of his disappearance appears out of nowhere. All strange occurrences that feed into the mystery of Eric’s vanishing and Ben’s constant mission to find his whereabouts. Eric’s presence is there, and as tension mounts, Ben knows that he’s getting closer to his lost brother. 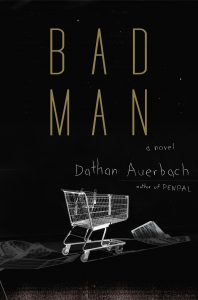 As the clock strikes closer to the end, the shroud of mystery doesn’t let up. Is there a presence in the store to be held responsible for Eric’s disappearance? What untold things of narrator Ben’s past can be held into account or the past of those around him? What part does the mysterious Blackwater school have to do with the missing boy?

While stunningly spooky in many aspects and with haunting imagery that will be recalled especially in a walk through the woods, there are many loose ties untold in author Auebach’s summer release. Story lines mentioned but not resolved, mysteries and histories brought up that seem to serve no purpose to the general outcome. With these criticisms aside, BAD MAN, is a great fun summer read. It’s absorbing and surely unsettling. Dathan Auerbach might be an unfamiliar name to most,  but he’ll be on the radar of horror fans from here on out.