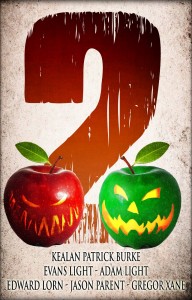 The Bad Apples crew are back with their second Halloween collection and they’ve added Kealan Patrick Burke to the mix, an assortment of six leading lights and promising voices in the world of horror.

First up is Edward Lorn with Halloweekend, Dean Laymon opens the Horror House every year at Halloween for the visitors but a stroke prevents him this year and with no-one to feed the animatronics. Things aren’t looking too good for the neighbourhood closest to Horror House, in fact what better night for carnage than this one. The Lorn horror humour is back.

Candie Apple by Evans Light is horror revisited on Bob Talley, twelve months ago his wife Candie was bobbing for apples after their Halloween party when a shelf collapsed and dumped a toolbox on her head just as she’d got an apple clamped between her teeth, stretching her jaw wide. This year the horror of Halloween just won’t leave Bob and his children alone. Shouldn’t laugh at the accident but it sounds too much like one of my shelves.

Jason Parent’s contribution is Dia de los Muertos and the day of the dead festival in Mexico. Three days of celebration and Russell Thompkins avoiding the light on a night of blood. Intermingled with his time spent in Afghanistan, in the tunnels and something even his captors are terrified of. Top job with a familiar character type.

Tommy Rotten by Adam Light tells the story of a prisoner to an abandoned haunted house on the one night of the year when Tommy Rotten can capture a companion, get the pumpkins out. The One Night of the Year by Kealan Patrick Burke sees an old man sitting up on his porch all night, waiting for the yearly visit from the masked visitors that step soundlessly from the cornfield. Cracking tale of shivers.

‘Shel stood in the middle of this impatient throng and lit up a smoke. He sucked on the thing like it was the nipple of a water goddess he’d discovered after six days of dehydration on a desert isle. And when he exhaled, he made the sound Jimmy often heard the man make when he settled down on the toilet for his morning shit, a sound that said ‘this is what it’s all about.’

Six enjoyable horrific Halloween tales with the odd slice of humour neatly wrapped up amongst the violence and mayhem.