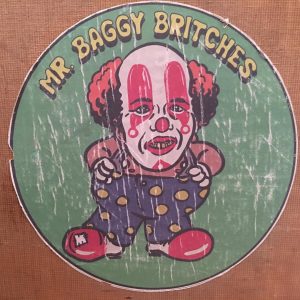 Another name has been revealed from the cast of Rob Zombie’s 3 From Hell and oooh, it’s a good ‘un. While celebrated for some ace B-horror flicks including Evilspeak, The Ice Cream Man and The Toy Maker, the great Clint Howard has a hugely eclectic CV and almost 250 screen credits to his name. In 3 From Hell, Howard may well be giving Sid Haig’s Captain Spaulding a run for his money, playing a clown with the name Mr. Baggy Britches, who Zombie teased a few days back with the cute little badge below.

Howard has worked with Zombie three times before, appearing in Halloween, The Lords of Salem and the animated The Haunted World of El Superbeasto, and is a very welcome addition to the director’s latest.

We still know next to nothing about how Zombie plans to do revive Baby, Otis and Captain Spaulding, who were last seen driving into a hail of gunfire to the sounds of Lynyrd Skynyrd’s Freebird at the climax of The Devil’s Rejects. The film’s title however, has led many to assume something of a supernatural bent, and the three sadistic sickos returning from the grave.