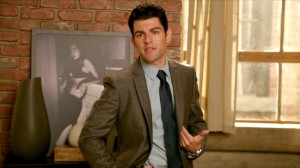 The latest season for popular horror show American Horror Story will be located inside a hotel, where the guests get more than hospitality.
Ryan Murphy is currently casting for the show and took to Twitter to announce that comedy connoisseur Max Greenfield will star.

Greenfield, known for his role as Schmidt in New Girl, will enter the hotel, however his character and fate are still unknown. Murphy wrote on Twitter an ambiguous and creepy statement that might give hint to Greenfield being a victim, and one that certainly doesn’t have many survival instincts. 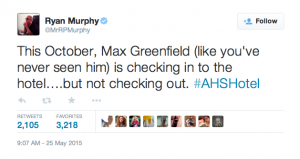 Also starring in American Horror Story: Hotel is long standing stars Evan Peters, Sarah Paulson, Kathy Bates and Angela Bassett. Some of the fresher faces are far from new to the fame game as Lady Gaga, Matt Bomer, Wes Bentley, Chloe Sevigny and Cheyenne Jackson join. Unfortunately Jessica Lange decided not to return to this season, so we will no longer have the iconic actress on board.