2017 marks the 30th anniversary of one of the very best horror sequels of the ‘80s, and the time when fans of a certain razor-fingered child killer got the chance to see deep into his awful backstory. I talk of course, of A Nightmare on Elm Street 3: Dream Warriors.

Dream Warriors will always hold a special place in the heart of this fan, as it was the first Elm Street film I ever saw. My mother may have given a disapproving look when I brought the video home, but I was ridiculously excited to get my first real taste of Freddy. Another huge admirer of the film is artist Steven Holliday, who has paid tribute in fine style with this stunning alternate poster, which he has unleashed in both green and blue versions, both of which you can see below. 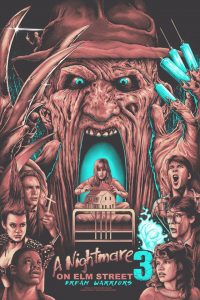 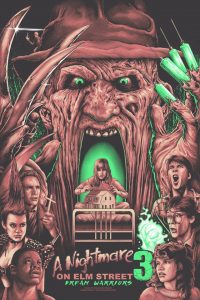 “Spent 9 months of my life designing this,” Holliday said of his artwork. “Started October 15, 2016 and just got it back from the printers a week ago. Nightmare on Elm Street 3 is one of the greatest sequels and one of the best horror movies ever made not to mention one of my faves. 2017 marks its 30 year anniversary. Can’t thank Delicious Design League enough for knocking this print job out of the park.”