Sam Levinson’s digital-age thriller Assassination Nation has bagged what Deadline are reporting as the first eight-figure deal of the Sundance Film Festival, with NEON and AGBO having partnered to acquire the film for upwards of $10 million.

The film, which is promised to be “…a thousand percent a true story about how the quiet, all-American town of Salem, absolutely lost its mind,” stars a host of young genre talent and newcomers, including Odessa Young (Looking for Grace), Suki Waterhouse (The Bad Batch), Bella Thorne (The Babysitter), Joel McHale (Deliver Us from Evil), Hari Nef, Abra and It’s Bill Skarsgård. 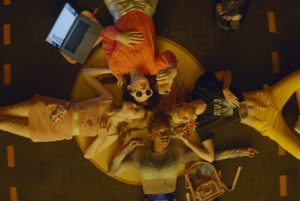 Synopsis:
The story of what happens when a social media-savvy high school senior and her friends observe the results of what happens when a provocateur starts posting details from the private digital lives of everyone in their small town — it turns the town upside down. Browser histories, direct messages, illegal downloads, secret text chains, and worse. It creates a worst-case scenario of what is possible in the digital age.

NEON and AGBO picked the film up for worldwide distribution, including a wide release commitment.