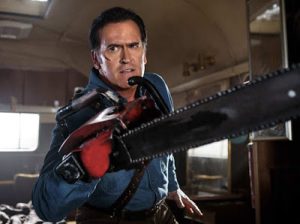 A few days ago it was announced that Starz had cancelled Ash vs Evil Dead, suffering the same fate as the beloved Hannibal and coming to an end after three seasons. Boo!

It seems like a huge shame, because the third season has been a strong and fun one. The characters have grown and, expectedly, Bruce Campbell has kicked some serious ass in the role of Ash Williams.

Adding to the depressing news, comes with Campbell’s confirmation that he is done playing Ash. This shatters our hopes that the show could have been picked up by Amazon on Netflix, continuing the story that we’ve enjoyed thus far.

Campbell took to Twitter to say, “Big props to fans for the effort, but I’m retired as Ash”.

There it is readers, Ash vs Evil Dead and Ash Williams are finished.