Ash Parties Hard in the First Image from Ash vs. Evil Dead Season 2

After all the terror that Ash went through in the first season of Ash vs. Evil Dead it’s great to see that he has found the time to party in Season 2. The first image from the much-anticipated season 2 shows Ash really letting his hair down. There are no deadites in sight as the chainsaw-handed slayer don’s a summer shirt and shorts as he, assumedly, gets wasted with a few hot guys and gals. 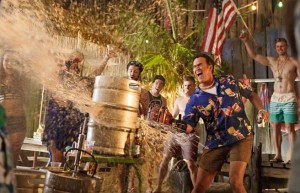 Alas, the good times can’t last, because where’s the fun in that? Despite Ash’s intentions and desire to party hard, the dead are surely on their way. As the show’s executive producer says, “The party is cut short when he must return home to continue the fight against evil.”

Season 2 will star Lee Majors as Ash’s father and Michelle Hurd as his high school old flame, so there’s plenty to look forward to in the next season. In particular, it will be interesting to see what Ruby gets up to now that she possesses the Necronomicon.

Ash vs. Evil Dead Season 2 will return this Autumn.